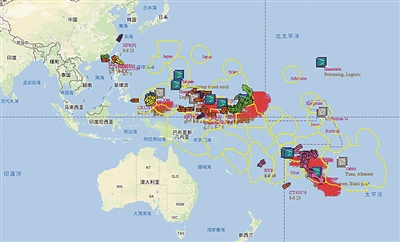 Ocean fishery information management system developed independently in connection with deep-sea fisheries
In May this year, the "one belt and one way" International Cooperation Summit Forum was held in Beijing. The construction of "one belt and one road" was gradually transformed from concept into action and from vision to reality. Shenzhen has taken a solid step in the construction of "one belt and one road". A large number of Shenzhen enterprises have made full use of the advantages of technology, capital, talents and other aspects to actively "go out" and let Shenzhen brand go to the world. In accordance with the requirements of "four adherence, three support and two leading position", the Shenzhen municipal government work committee and the Shenzhen Municipal Commission for promoting trade and development have fully investigated and actively planned and jointly organized a series of activities for the participation of the enterprises in the "one belt and one road" construction. The problem is to promote more Shenzhen enterprises to "go out" better.
The development of Ocean Fisheries plays an active role in the implementation of the "maritime power" and "going out" strategy, the expansion of foreign economic cooperation and the safeguarding of national marine rights and interests. Shenzhen Lianhe Ocean Fishery Group, founded in 2002 and active in the South Pacific Ocean, now has 72 tuna longline fishing vessels. The fleet is in the leading position in China. As a "leading agricultural enterprise" in Guangdong and Shenzhen, the joint ocean fishery is actively responding to the "one belt and one road" construction of the state, and strives to make a broader sea route by way of "Silk Road economy".


Years of deep plowing of Pacific island markets
"As early as more than a decade ago, integrated Pelagic Fisheries started investing in Pacific island countries, mainly in tuna longline fishing operations in the exclusive economic zones of the Federated States of Micronesia, the Republic of Palau, the Marshall Islands, the Cook Islands and so on." Chen Qingbai, general manager of Shenzhen Liancheng Ocean Fishery Group, said that the company mainly developed a modern fishery with "fishing-breeding-seedling-processing" as a whole, rather than a single fishery production mode dominated by fishing in the past.
He pointed out that although China's pelagic fishery started in 1985, compared with developed countries later, but after years of development, China's industry has been in the forefront of the world. "Under the initiative of" one belt and one road ", Pelagic Fisheries will expand the blue economic space in China and play a greater role in the allocation of global marine resources.
Therefore, joining the pelagic ocean has spared no effort in the sustainable development of Pelagic Fisheries. It is understood that in June 2015, the company officially became the first offshore fishery enterprise in China to be certified by the International Marine Management Commission (MSC), meeting the requirements of sustainable fisheries and seafood traceability standards. In addition, FIP certification has been obtained in the Marshall Islands, the Federated States of Micronesia and the Cook Islands. Some fishing vessels have been certified by the European Union and Cook Islands yellow fin tuna MSC certification in 2017. "After 15 years of development, the company has formed a set of ocean-going fishing fleet, overseas fishing base, logistics, sales of the whole industry chain management model." Chen Qingbai said.


Take root overseas and gain local trust.
According to Chen Qingbai, the Pacific island countries are rich in marine and environmental resources, and 60% of the global tuna production comes from this region. The company's main fishing areas are also concentrated in the exclusive waters of the Pacific island countries. "The industrial nature of offshore fisheries determines the need to'Go out', so the company has been developing for many years, with the Pacific island countries have been very close cooperation."
He said that the Pacific island countries welcomed the long-term presence of China's offshore fishery enterprises and the expansion of related chain business. In recent years, the pelagic fishery has responded positively to the "one belt road initiative" and strengthened the construction of overseas bases, which not only can promote the local economic development, but also solve the local employment problem.
It is understood that the United Ocean Fisheries has now established a wharf, warehousing and transshipment facility in the Federated States of Micronesia, a tuna transshipment centre in Cosley and the only Chinese-operated ship repair base in the Western and Central Pacific Ocean, as well as an ice-fresh tuna, which has been in operation since 2009 in the Marshall Islands. Factory. Chen Qingbai said that because these organizations have hired a large number of local workers, "localization" work is better implemented, so the government departments at all levels and local people in these countries have a very high evaluation of the company's related industries, the two sides have established good cooperation and friendship.


Deepen maritime cooperation and create excellent models
The Pacific island countries are rich in marine resources, but their economies are underdeveloped. The "going out" of China's Pelagic Fisheries is of positive significance to their economic development. Chen Qingbai pointed out that Chinese enterprises could provide assistance to these island countries in five aspects: oceanic fishing, aquaculture, ecotourism projects, oil supply, port construction and maritime transport, and "give fishing to local residents" by importing new technologies.
"Joining the pelagic fishery industry as one of the representatives of the industry will continue to deepen the" one belt and one way "initiative in the future and further strengthen its cooperation with the Pacific islands of the Marshall Islands, Micronesia, Samoa and other Pacific Islands, and will build Leizhou's fishing base into a plate base, so that it has a complete set of shore based facilities. The implementation of services and covering all links of the fishery industry chain provide services for more enterprises and projects to participate in the construction of "one belt and one road". According to him, the company has now set up a company in Tahiti, and will start work in the cold storage, transfer center and fuel supply station next year.
As the ocean fishery has some special characteristics such as long distance and operation at sea, Chen Qingbai pointed out that the safety of production at sea should be guaranteed first, the safety of crew on board should be highly valued, and the safety of investment should be followed so that the political and economic stability can be chosen as far as possible. Country. "At the same time, we should build a chain of shipbuilding, overseas base, transportation and terminal market, and vigorously promote the full information management mode, so that we can take the initiative in the construction of" one belt and one road ".